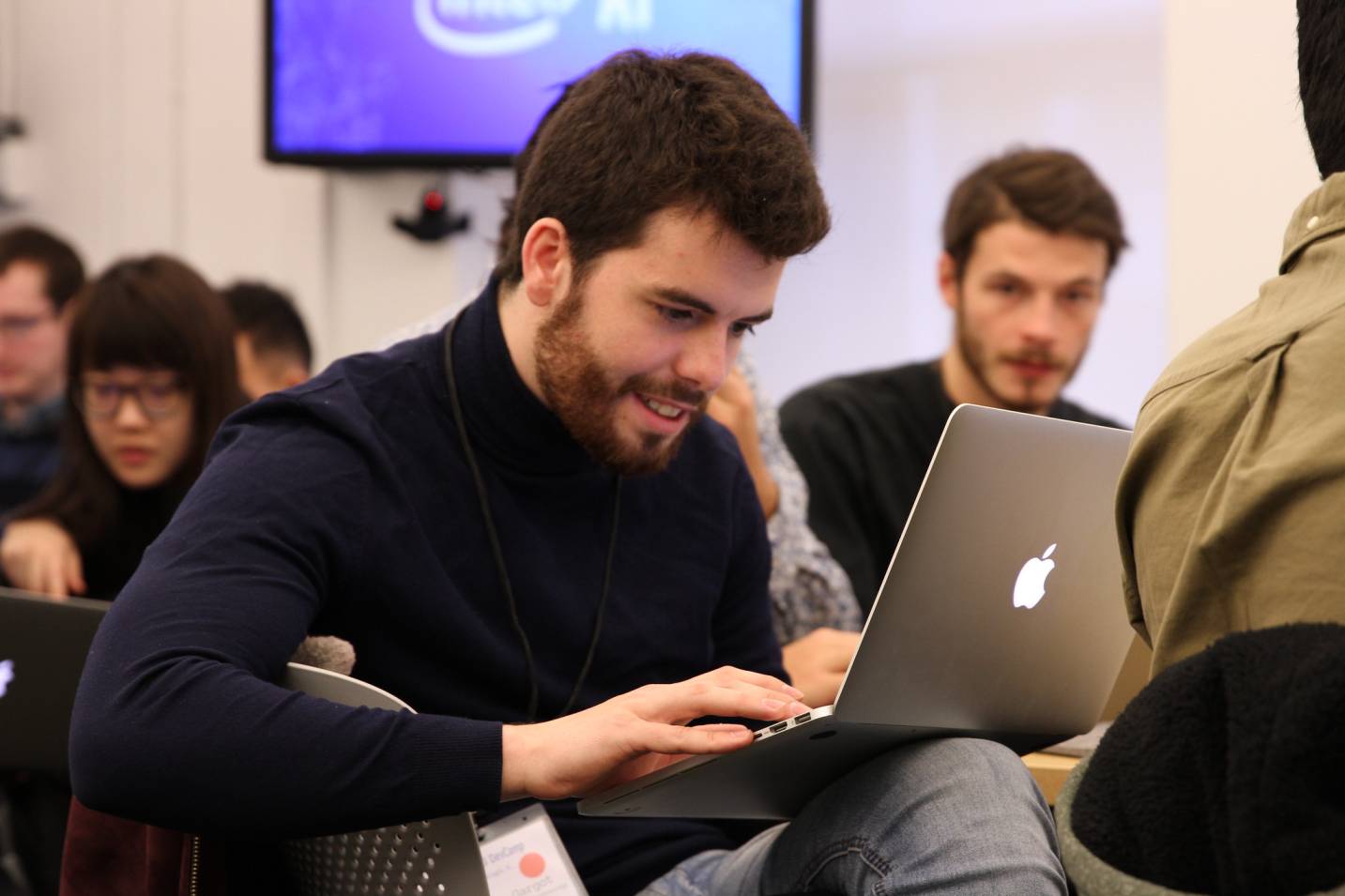 Guides to run a hackathons

Game Hackathon Guide: Everything You Need to Know

A hacking competition may sound like something dangerous or even illegal if you don’t know what a game hackathon means.
‍

The truth is hackathons are erupting into one of the most searched for events to develop new technologies, optimize processes and of course have fun with them.

What is a Game Hackathon?

A game hackathon is an event where people get together to make a video game from scratch in two days or less. It's a fantastic way to meet new people and collaborate with them on something you love: making games!
‍

A typical game development hackathon has three stages: the "idea" stage, the "prototype" stage, and the "polish" stage. In the first stage, everyone comes up with game ideas and pitches them to the group.
‍

Once an idea is chosen, teams form around that concept and begin working on a prototype. In the final stage, teams take their prototypes and add finishing touches to make them as presentable as possible.

Is a Game Jam a Hackathon?

A game jam is similar to a hackathon, but with a few key differences:

Another significant difference between hackathons and game jams is the focus. A game jam is all about making a game, while a hackathon can be about anything. For example, there have been music hackathons, education hackathons, and even food hackathons. The sky's the limit!

Benefits of Hosting a Game Hackathon

There are several benefits to hosting a game hackathon.

Benefit #1: Introduce New People to Each Other

A hackathon is a great way to introduce people to each other. You'll have a mix of experienced game developers and newcomers working together towards a common goal. This can be a great way to help others make new friends and expand their professional network. This will also help create a stronger sense of community within the game development scene.

A hackathon is also an excellent opportunity for people to learn new skills. For experienced developers, this is a chance to try out new ideas and technologies. For newcomers, this is an opportunity to learn from those who have more experience. Either way, everyone involved will come out of the event with new skills and knowledge.
‍

By hosting a game hackathon, you can help people level up their skills and knowledge.

Benefit #3: See What People are Capable Of

One of the best things about hackathons is that they allow you to see what people are capable of. When given a short time frame and limited resources, people are often surprised at what they can achieve.
‍

This is a great way to see the potential in people and get an idea of their true capabilities. Seeing other people's potential can motivate and inspire you to do great things yourself.

One of the main benefits of hosting a game hackathon is that you'll have some great games! Even if not every game made is a masterpiece, it's still exciting to see what people can come up with in such a short period. Plus, you never know when someone will create the next big hit game, and you'll be able to say that you were there from the beginning.

By hosting a game hackathon, you'll be helping to advance the game development industry as a whole. This is because hackathons are a great way to generate new ideas. As people come up with new ideas and experiment with different technologies, the industry will move forward. In addition, hackathons can help to foster a sense of community and collaboration within the industry.
‍

All of these benefits make hosting a game hackathon a great idea. So if you're thinking about hosting one, keep these things in mind.

How to Run a Successful Game Hackathon: A Full 9-Step Guide

If you want to run a successful game hackathon, there are a few things you need to do. Below is a complete 9-step guide that will help you plan and execute a successful event.

Select a Date and Location

The first step is to select a date and location for the game hackathon. The date should be far enough in advance that you have time to promote the event and get people to sign up. The location should be easily accessible and have enough space for everyone involved.

The next step is to determine the format of the event. For example, will it be a 24-hour game jam or a 48-hour hackathon javascript game event? Will it be online or in-person? To determine the correct format, think about the goals of the event and the type of people you're trying to attract. This is also important to avoid controversy when selecting hackathon game winners.

Once you've determined the format, it's time to choose a theme. The theme will be the basis for all of the games created during the event. Therefore, it's essential to select a theme that is broad enough that it can be interpreted in many different ways.

Now that you have the basics planned, it's time to start making a schedule. The schedule should include everything from when the event will start and end to when different activities will occur.

The next step is to create a website for the event. The website should include all vital information about the event, such as the date, location, and schedule. It should also have a way for people to sign up for the event.

Now that you have everything planned, it's time to promote the event. There are several ways to promote an event, including the following:

Once you have everything else planned, it's time to start thinking about the games. What type of games do you want to see at the event? How can you make sure that the games are fun and challenging?
‍

One way to plan the games is to create a list of game ideas that you think would be fun to play. Then, share the list with the participants and let them vote on which games they'd like to play.

While organizing a game hackathon can be a lot of fun, there are a few mistakes that you should avoid. Below are some of the most common mistakes.
‍

One of the most common mistakes is not planning enough. This can lead to a chaotic event that is difficult to manage.
‍

Plan everything and create a schedule that everyone can follow to avoid this.

Not Promoting the Event

Another mistake is not promoting the event enough. If no one knows about the event, no one will come.
‍

Promote your event wherever you can. It doesn’t need to be fancy and can be in the form of a simple email or phone call. If you let people know what and when, you’re all set.

Failing to Get Sponsors

Another common mistake is failing to get sponsors. This can be a big problem, especially if the event is expensive to run.
‍

Make sure to reach out to businesses relevant to the event and offer them benefits, such as publicity, in exchange for their sponsorship.

A final mistake is not creating challenging games. If the games are too easy, participants will get bored and won't want to play.
‍

There is no shame in going online and internet forums to search for the best ideas. Your hackathon doesn’t need original games, it needs good ones and you should look for them wherever you can.

To run a successful game hackathon, you need inspiring game ideas. Below are eight ideas to get you started.
‍

With the rise of augmented reality (AR) technology, AR games have become very popular. An AR game is a game that uses real-world objects and environments to create a more immersive experience.

If you're looking for an AR game idea, you could create a game that uses AR to create a more immersive experience.

Virtual reality (VR) games are another popular type of game you could use for your game design hackathon. VR games are played using a VR headset, which immerses the player in a virtual world.

Web games are another type of game that would be great for an electronic game hackathon. Web games are played using a web browser.

Looking for the Right Platform for Your Hackathon Games? Try Hackathon.com

If you're looking for the right platform for your hackathon games, look no further than Hackathon.com, the world's leading hackathon platform, with multiple hackathons taking place each year.

At Hackathon.com, you'll find various hackathons to choose from, including game design hackathons.

Environmental Hackathon Guide: Everything You Need to Know
More

12 Hackathon Ideas for Healthcare
This is some text inside of a div block.
More

FinTech Hackathon Guide: Everything You Need to Know
This is some text inside of a div block.
More

Hackathon Sponsorship: Top Tips for Hackathon Organizers
This is some text inside of a div block.
More

Complete the form and get your free hackathon quote!
We’ll get back to you within 24 hours.
Thank you! Your submission has been received!
Oops! Something went wrong while submitting the form.
Our
Offices
SAN FRANCISCO
535 Mission Street
San Francisco
CA 94105
BOISE
390 E. Parkcenter Blvd
Ste 150
Boise, ID 83706
AUSTIN
2301 W Anderson Ln
Austin, TX 78757